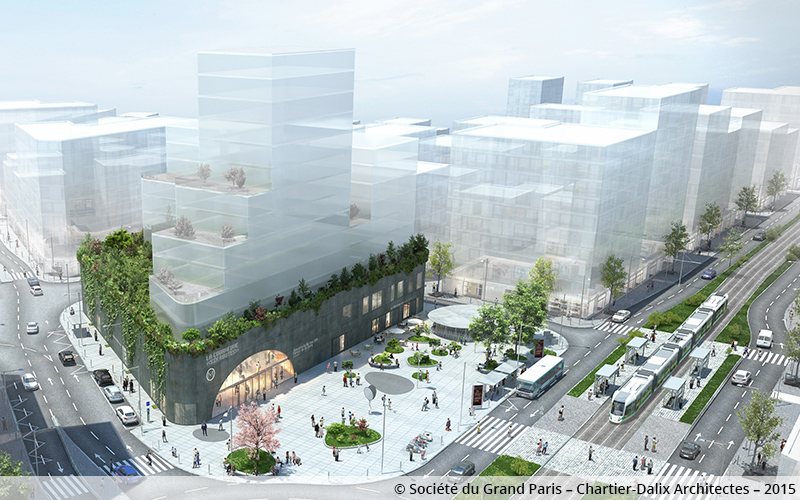 The Grand Paris Express project, managed by the Société du Grand Paris (SGP) and aimed at developing the mobility of the future, includes the construction of 68 stations and the development of almost as many transit hubs.

SGP has called on a consortium composed of Transamo, Edéis and Ilex Paysages to provide technical assistance for coordinating the implementation of these hubs.

The mission of the consortium will spread over a two-year time, is renewable for two additional years, and is led by a team of 12 people working full-time on secondment to SGP.

To superintend the overall coherence of Grand Paris’ hubs so that these, designed by local contractors, will contribute to the creation of a common identity.
To contribute to the success of intermodal travel around the future stations and to incorporate into the hub project a forward-looking vision of mobility for the time when the Grand Paris Express will come into service.

To contribute to the success of intermodal travel around the future stations and to equipped the hub project with a future-oriented vision of mobility for the time when the Grand Paris Express will come into service.

To promote the definition of guiding principles for all the hubs by applying and monitoring the approach of the “Grand Paris Sites Workshop”.

To launch calls for innovation projects that will encourage the development of those forms of mobility for the future that will accompany the Grand Paris Express, and to foster new ambitions in the design and construction of public spaces around future stations.

Execution of the mission

At the end of 2017, all the hub studies have been launched.

The consortium in charge of the “Grand Paris Sites Workshop” (French architecture and urban planning agency TVK) began its mission in March 2017.

The first experimentations have been launched during autumn 2017.